This series is perfect for anyone interested in becoming an RP using the new credentialing process. All members are welcome. It is an excellent refresher for credentialed members interested in mentoring, teaching, or who just want to review their skills. Make sure to have your copies of the 12th edition of RONR and the 3rd edition of RONR In Brief handy!
Registration is required for each session — there is no charge. These sessions are available only to members, so you will need to log in to register. If you haven’t logged into the new NAP Portal yet, please watch this video.
Click here to view all NAP events and register for the next part of the RP Training Series.

NAP members can purchase the recordings and lesson materials from past RP Training webinars for free through the NAP Bookstore. You will first need to sign on to your account in the NAP Portal, then type “New RP Training-Supplemental Information” into the search bar of the bookstore. Once purchased, follow the steps below to access the material.
JUL
2021

The Professional Standards Committee workshop at this year’s NAP Convention will be “Avoiding Professional Responsibility Pitfall—Best Practices.” The four members of the committee certainly have their own tips and techniques to share with the attendees. But we know that many of the attendees also will have valuable tips and techniques to share as well.

To make the workshop more interactive, the Professional Standards Committee is requesting that members who plan to attend bring and be prepared to share their own tips and techniques for avoiding professional responsibility pitfalls.

Another possible source of tips might be “war stories” from anyone who has been the subject of a professional responsibility complaint and is willing to share the story. This could include such matters as things you did before or during a meeting that helped with your defense against the charges, things that in hindsight you wish you had done differently, or anything else that you think would be helpful to your fellow parliamentarians. Please be assured that if you choose to share any such information with the committee, we will make sure to keep your identity confidential unless you, on your own initiative, reveal it during the workshop.

If you have examples of contracts, letters of engagement, or other written items that you have developed, or if you are willing to share your “war stories,” you may send then (suitably redacted) to before the convention. Even if you do not plan to attend, the committee welcomes you to send anything that you think may be useful to your fellow parliamentarians.

So, You Want to Be a Commissioner

A message from the NAP Commission on Credentialing

There will be four individuals elected to Commission on Credentialing seats at the NAP Biennial Convention in September 2021. Of the four positions to be elected, three are for full four-year terms and one, because the Board of Directors temporarily filled a vacancy, is for a partial term of two years.

The commission would like to give those who are considering running for the commission a realistic idea of the commitment that entails.

Since the 2020 NAP Training Conference, the commission has met 30 times over Zoom and, currently, is meeting EVERY Monday afternoon. Each of these meetings is two to four hours in duration, which is a total of about 90 hours. The commission plans to continue this schedule until the convention, as well as have two face-to-face meetings in Las Vegas. At the face-to-face meetings, the commission meets from 9 to 5 each day, with additional work in the evenings, for four days. The first meeting is scheduled for July 1 to 6, including two travel days. And yes, commissioners are missing celebrating the 4th of July with our family and friends; this is that important. The next meeting will be held August 26 to 31. Why Las Vegas? There are cheaper hotel rates there than elsewhere and flights aplenty from everywhere.

While commissioners receive the same per diem and travel costs reimbursement as NAP committee members do, those do not cover the full cost. Each commissioner pays a few hundred dollars out of pocket for each face-to-face meeting.

In addition to these meetings, each commissioner spends from two to 15 hours per week performing other commission work (varies with where the commission is in the process), such as evaluating candidate submissions (currently, evaluation of candidates’ submissions is done by the commissioners), drafting documents, reviewing proposals, analyzing psychometric test results data, and much more.

It is hoped that having this information will assist those thinking of running for the commission in understanding the commitment of time and personal resources that is involved.

If you would like to be considered as a candidate for the Commission on Credentialing, please complete and return the Commission Consent to Serve Form. 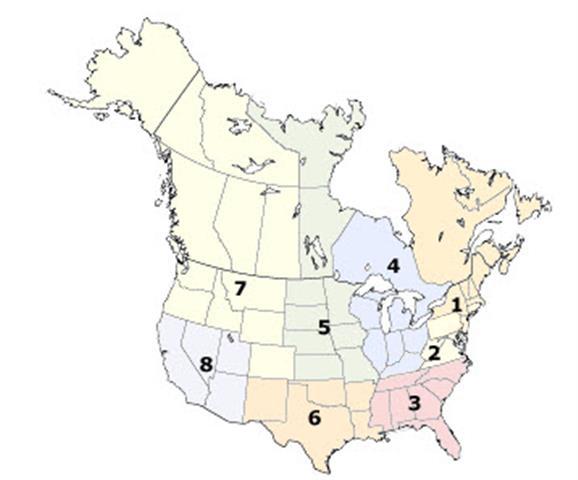 Recent growth trends in membership have necessitated the realignment of several NAP associations. Delaware, New Jersey, and Pennsylvania are now assigned to District 2 and Kentucky to District 4. This realignment, effective May 11, 2021, ensures a more balanced geographic distribution of associations and their members.
The role of districts is to promote NAP educational programs and NAP membership recruitment and retention. (NAP Bylaws Article IV, Section 2). District boundaries were last redrawn in 1999. That realignment moved Delaware, New Jersey, and Pennsylvania from District 2 to District 1 and Kentucky from District 4 to District 2.
APR
2021

Posted By : Alex Blair
Comments : Off
As we continue to navigate this virtual landscape for our workshops and events using Zoom, we would like to remind you of some tips to help you have a seamless experience.
We have noticed registration and sign-on links and buttons will not work with certain internet browsers. When providing Join Links in communications from headquarters, we will begin providing the Meeting ID and passcode to minimize issues members may experience joining workshops and events. If the registration or sign-on button does not work, you will be able to copy and paste the URL, meeting ID and passcode to your internet’s address bar to join the meeting. Questions may be posed to , but be aware that prior to the start of the meeting, response may be somewhat delayed as preparations are being made for the upcoming event.
1234

Special Recognition to Our Mentors